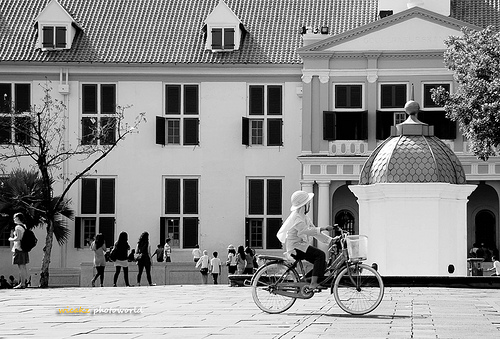 In its heydays in the 16th century, Batavia was known as “The Queen of the East” and “the Jewel of Asia”. Its Sunda Kelapa harbour was abuzz with merchant vessels from Europe, China, India and from throughout the Indonesian archipelago, loading in and sailing away with precious nutmegs, pepper, tea, coffee, ceramics, cloths and other exotic products of the time. The warehouses were stacked with spices, tin and copper. The successful trade in Batavia filled the coffers of the Netherland’s Treasury. Center of the VOC Dutch East India Company’s administration was the Stadthuis with its wide front plaza, around which were the Court of Justice, banks and other important buildings.

Later the city expanded to the west bank of the Ciliwung river, where the Dutch built a fortress, a city wall and canals, outside which was Chinatown and the homes of the indigenous people. This entire area, covering 1.3 square kilometers is today called the Old Batavia, present day part of North and West Jakarta. Before this, in 1526, Prince Fatahillah of Banten invaded the harbour of Sunda Kelapa of the West Javanese kingdom of Pajajaran, On 22 June 1527 he renamed the town Jayakarta meaning victorious city.  Until today, Jakarta bases its founding on this date.

In 1619, however, Dutch Governor Jan Pieterszoon Coen destroyed the town, upon which he built the new town of Batavia – naming it to the ancestors of the Dutch, the Batavieren. Today many of the original buildings are still intact, The government has designated the Old Batavia as conservation area and plans are afoot to revive the entire neighbourhood into a tourst destination.

Today, the Sunda Kelapa Harbour is an inter-island harbour, where one can mostly find Bugis phinisi schooners at anchor. Nearly are the old warehouses, which are now converted into a Maritime Museum. This museum houses models of old Dutch ships and the many types of boats used in the archipelago.

Center of the Old Batavia is the former municipal building or Stadthuis, which is now a Museum depicting Jakarta’s long history, called Museum Fatahillah, while the square is called the Fatahillah Square. The Fatahillah Museum is built in classical baroque architecture consisting of a main building with two wings on its east and west, acomplementary building used as an office, a court room, and an underground prison. These frightening prison cells contain heavy iron balls used to shackle prisoners and slaves.

Around the square are the Fine Art and Ceramic Museum, one time Court of Justice, which houses splendid paintings of the romantic maestro Raden Saleh, and expressionist Affandi. There is also a collection of ceramics from many parts of Asia. There is also the Wayang Museum, the Bank Indonesia and Bank Mandiri Museums, housing artefacts related to the banking world.

In the vicinity are the Sion Protestant Church, built in 1695 and still in use until today, the Pasar Ikan – or Fish market, the Kota Intan Drawbridge – a reminder of canals and bridges in Holland, and the old Jakarta Kota Station, also still operational today. The Café Batavia has been restored and now offers authentic Dutch cuisine, pastries, coffee and tea, in relaxing retro atmosphere with high ceilings, large windows, ceiling fans and wooden beams.