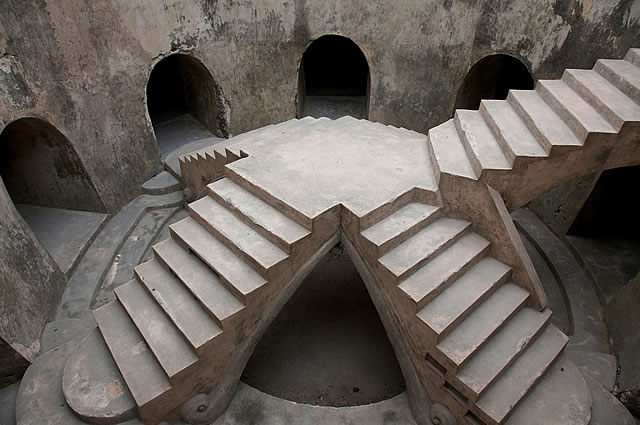 When a traveler is browsing in Kraton, then she/he should not miss The Water Castle or known as Tamansari, less than 1 Km west of Kraton. Just west of the Kraton, are the ruins, pools, arches and underground passages of the former pleasure gardens. It was built in 1758 by Sultan Hamengkubuwono I as a rest house and pleasure park for the Royal family. Tamansari means beautiful garden.

It was badly damaged due to an earthquake in 1867. Some parts of it, for instance "Umbul Binangun" bathing pools have been restored. Upon seeing the ruins of Taman Sari, some cultural experts say that it has multi purposed functions, such as:

1. A Rest house, in the form of water castle with beautiful park. The air is fresh due to:
Artificial lakes and canals
Bathing pools
Large gardens with several kind of varieties of trees

3. A place for meditation

4. An important palace and shelter for the Sultan. It was well protected. It had 2 Bastions with 12 and 6 Cannons.

The Castle itself divided into two (2) complexes. They are:

A. Umbul Binangun - swimming pool complex
It is the swimming pool where only the Sultans women can frolic. In this complex only woman employees serve the Sultan. Theres also a three story tower, with Sultan private bedroom stands south of the swimming pool and The Sultans private bath-pool is behind the tower. Somewhere in the south part of the palace, there is a special place, believed to be Sultans meeting place, from time to time with the Goddess of the South Sea, Kanjeng Ratu Kidul.

B. Pulo Kenongo - Complex
Pulo Kenongo, the Palace of Kenongo Island was found in the middle of Segaran Taman Sari. (Taman Sari artificial lake, which was connected by water canal to the other artificial lake nearby the kraton) Kenongo is a name of flower trees planted in the front yard, where the fragrance spread out in the palace. Just like in a palace, there were living rooms, bedrooms, rooms to make Batik, a hall to perform classical sacred dance of Bedoyo and Srimpi, gates and sentry-boxes guarded strongly by the palace soldiers.